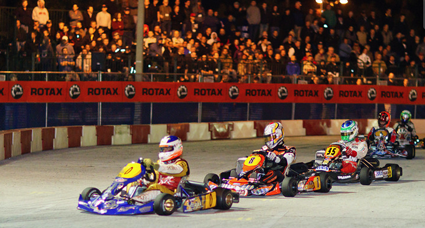 In an outstanding night of action-packed racing under the lights before a standing-room-only crowd of 3,500 members of the racing industry, Jan Heylen won the 2011 All-Star division race at the Red Bull Kart Fight at PRI, Powered by Rotax. He drove a CRG kart for the CRG USA team.

Jay Howard drove an Arrow chassis for the KartSport-Arrow team to a second-place finish, while the UK’s Ben Cooper, fresh off his Senior Division win in Dubai at the 2011 Rotax Max Challenge Finals, charged from P16 to claim the final spot on the podium. He drove a Praga kart, made by Intrepid, for the Praga North America team.

The race was held at the Performance Racing Industry Trade Show, on Thursday night, December 1, in Orlando. The PRI Trade Show is the world’s largest racing trade show, with exhibits by over 1000 companies, and attendance by 38,000 racing professionals from throughout the US and over 70 countries.

“It was an unbelievable and spectacular event! With Red Bull and Rotax as sponsors, the cooperation of the WKA and IKF, and all the great drivers, this was a great kart race!” exclaimed Steve Lewis, producer of the PRI Trade Show. “We’re so pleased to see karting so well presented before a standing-room-only crowd.”

Click here to view a photo gallery of the kart race.

The grandstand seating for 2500 was packed, and another 1000 people stood at the fence all the way around the race track, sometimes two or three people deep.

Heylen started in the pole position, but was soon overtaken by Howard, who started P2. Late in the race, Heylen took the lead in a bump-and-run, and kept it for the checkered flag.

“I got a little lucky with the lapped traffic,” said a modest Heylen, who won the last big kart race held at the PRI Trade Show. “I’ll be back next year,” added Heylen.

“This is a fantastic event,” said Howard. “I’m looking forward to coming back next year.”

Cooper finished second. Thonon finished third in the Karters division final, driving a CRG chassis for the CRG USA team. The top 8 finishers competed in the All-Star division, starting at the back of the grid.

Red Bull also organized a series of qualifying races for amateurs throughout the US who then raced in the Amateurs division of the Red Bull Kart Fight. It was won by Brendan Johnson, with Jason Drescher taking second and Steve Troyer finishing third.

The races will be televised nationally on Fox Sports Net in two segments:

Inside the exhibit hall, the same kart companies with chassis in the race were displaying their newest models to the racing industry buyers attending the PRI Trade Show. CRG, Arrow, Intrepid, Sodi, Birel, Praga, Zanardi, and DRT kart chassis were exhibited in the PRI Trade Show, along with such other karting suppliers as GoRotax, K1, AiM and more.