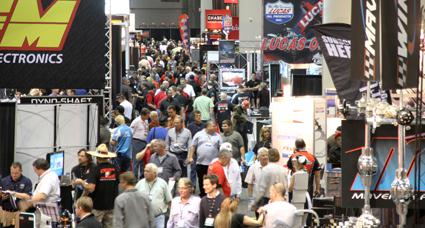 Both crowds and sales swelled at the 2011 PRI Trade Show on Friday, traditionally the busiest day of the three-day show at the Orange County Convention Center in Orlando, Florida.

Attendees arrived early on Friday morning and remained steady throughout the day.

“We’ve been very, very busy since the show opened yesterday,” said Dale Aldo, Motorsports Marketing Manager for Mopar, who’s highlighting its high-performance engine programs with its Gen-2 Hemi and Gen-3 Hemis, as well as the Mopar Drag-Pak. “We haven’t even had an opportunity to walk the show because we’ve been too busy.”

Similar reports were common throughout the Show.

“It’s been a fantastic show.  The foot traffic has been phenomenal and the energy is really up,” said Jason Cobb, of Impact by Mastercraft Safety.  “People want to take stuff right off the shelf – unfortunately, we don’t have the stock for that, but people want to get the product today. Impact’s been in in the industry for a long time and it’s absolutely imperative that we’re here at the PRI Show.”

“It’s been a great show so far,” said CV Products’ Ryan White.  “It’s been busy and very steady. We’re getting a lot of good feedback and seeing lot of customers that we don’t normally get an opportunity to see on a personal level – and a lot of international customers that you may not get a chance to see anywhere else.  The face-time we’re able to get here is second to none.  We’ve been coming to the PRI Show for more than 20 years and we’re here to stay.”

While exhibitors are beaming about the high-traffic volume and conductng business face to face, industry buyers are just as happy with the technology and product they’re finding on the show floor.

“It’s great to be at PRI,” relayed Clayton Triggs, of Swift Engineering Inc.  “We’re expanding our equipment base and we have 60,000 square feet to fill.  We’re looking to add autoclaves and lathes, as well as some additional machinery and we’re very happy with what we’ve found.  The only downside is that my feet hurt because there’s so much to see here.”

The opening two days have certainly delivered value for this year's Show.

“The aisles are full, but most importantly, people are doing business,” said Steve Lewis, PRI Trade Show producer.  “We had a great opening day and now it’s even bigger on day two.  It’s a little overwhelming.  The unique thing about the PRI Show is that we have such a great diversity here.  The bigger teams and shops are in here doing business and acquiring the latest technology, but I also had a young man come up to me and tell me that his family has been coming to the show for years and this will be their one-stop shopping for the entire year.”

Forty thousand racing business people from throughout the US and 65 countries are in attendance this year’s PRI Trade Show to get current with the latest in racing technology courtesy of the 1,000 motorsports companies introducing their new lines in racing products, machining equipment, motorsport engineering solutions and more.

Acura Motorsports has revealed its all-new, electrified Acura ARX-06 prototype sports car, which will make its competition debut next January at the…

Hennessey Appoints Michael Harley As VP Of Marketing And Communications